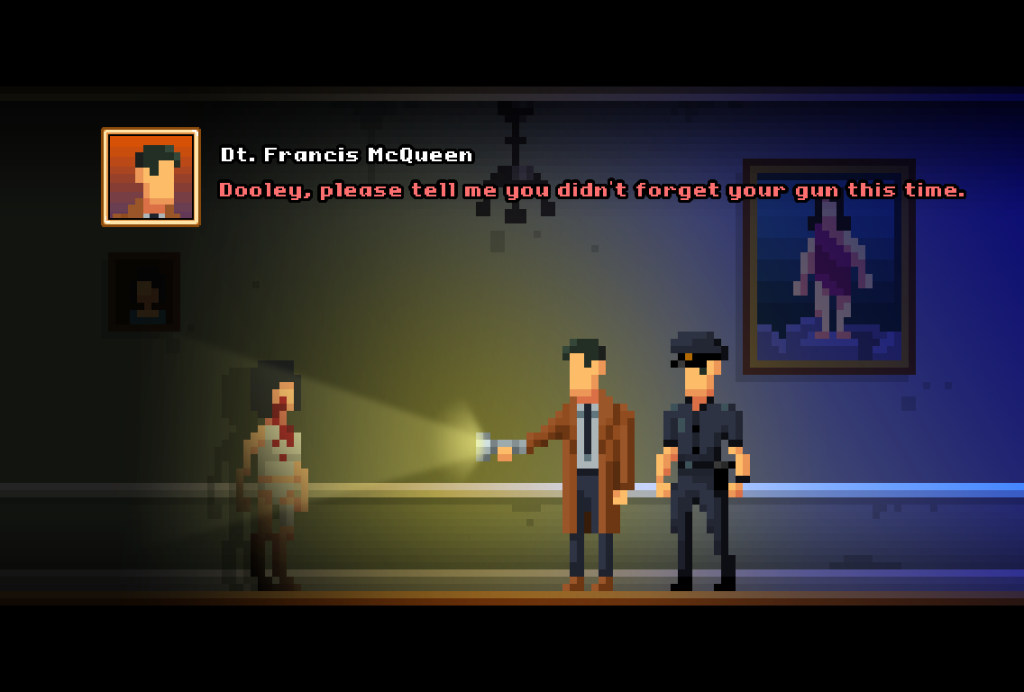 Allison Road is an amazing looking game being developed by Lillth Ltd. It’s being described as the spiritual successor to Silent HIll’s now defunct PT. We thought it would be a bit of fun to have the Darkside Division investigate in this screenshot.

Here is a breakdown animation of the workflow used to create the look of the Darkside Detective. It starts out as very simple line art and is then rendered up to add texture and detail. Finally it’s scaled up and the HD lighting is applied to give it its unique feel.

We get a few comments from time to time saying that McQueen reminds people of the Doctor from the British science fiction series, Doctor Who. Just for a little fun, our artist Paul knocked up this quick concept of what a potential crossover of the two franchises would look like. 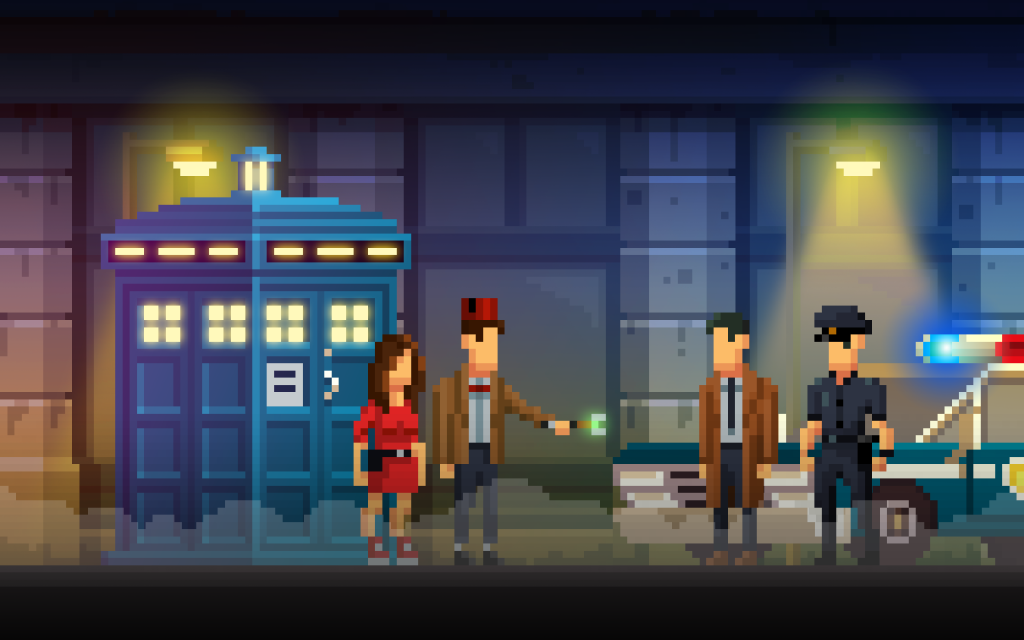 We’re playing around with special effects animations to add some extra power to specific scenes.

We’ve Been Playing Around With Some CRT Effects!

We’ve recently been play around with some old CRT TV effects on The Darkside Detective.  Here is our first attempt with the style. we like it a lot, but it definitely needs a bit of tweaking. We think the screen warp needs to go and the overall effect needs to be made a little more subtle, but we do like the character it adds to the game. Let us know what you think in the comments. 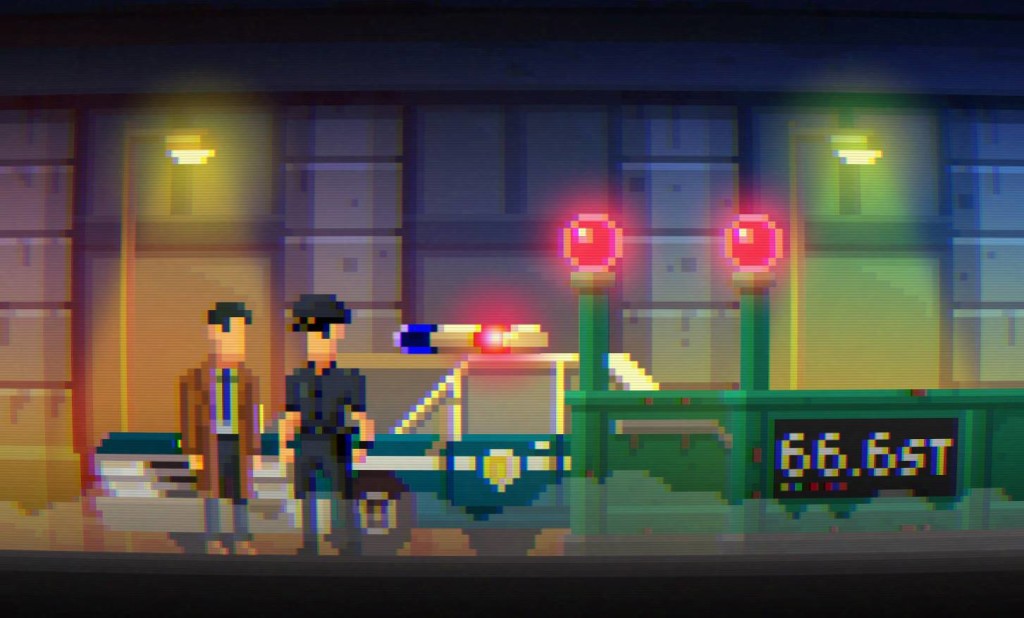 Brenda Romero will be guest writing on Season 1

We’re delighted to announce that Brenda Romero has signed on to guest write a case for our first season of The Darkside Detective.

Brenda is a world famous game designer, known for her work on the Wizardry RPG series and the acclaimed Train, among many other titles. She is Program Director at the University of California at Santa Cruz and CEO and Co-Founder of the games studio Loot Drop, which she runs with her husband John Romero. She was recently the recipient of the Ambassador Award at the Game Developers Choice Awards.

Brenda has been a long time supporter of The Darkside Detective, and it is a huge honour for us to have her come on board and write an adventure for Dooley and McQueen.

The Darkside Detective, Season 1: Deadbeats in Downtown, will be released on Steam later this year. The season will be a bundled package if 5 cases. Watch this space or follow us on social media for further updates.

We’re showcasing The Darkside Detective demo at State of Play tomorrow. We even got a nice new roll out banner printed for it. 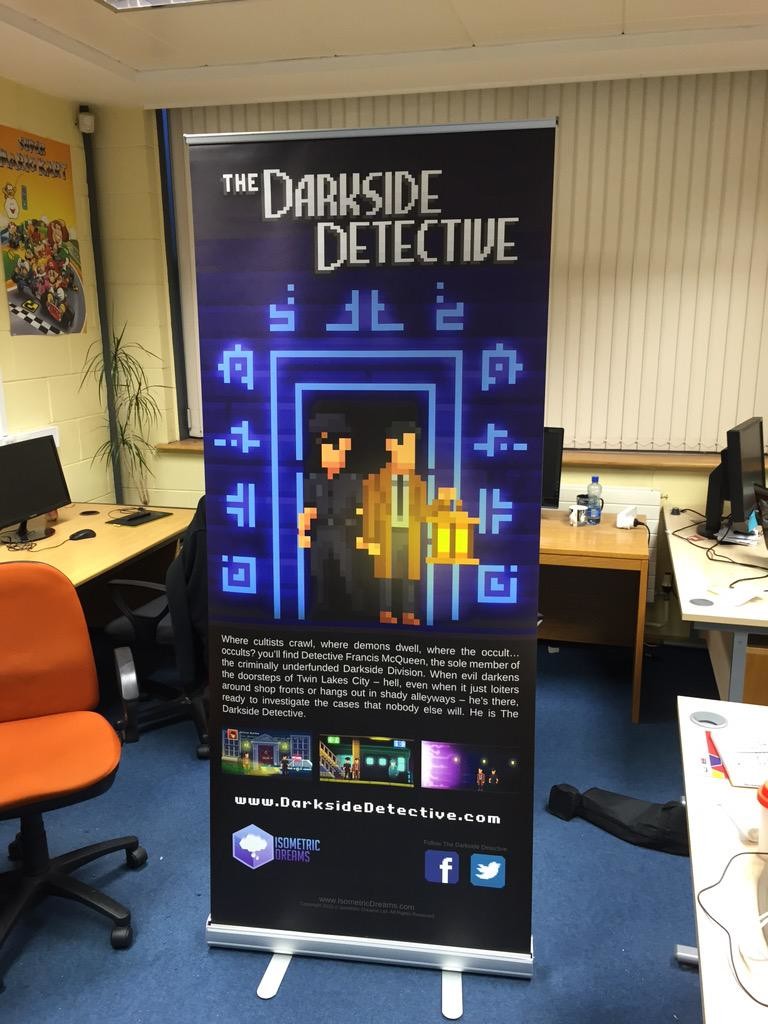 We made it throught GREENLIGHT!

Thanks to everyone who voted yes on our game. The Darkside Detective got through the Greenlight process in the startlingly short amount of time of 5 days. It’s very promising and shows us that there is a lot of interest in the game. Now all we have to do is make an awesome series of case files for you to enjoy. Thanks again, Paul out!