The Story So Far…

After quite a while of avoiding it, we’ve finally gotten around to writing up our first dev blog. A lot has happened since we first went public with The Darkside Detective a few weeks ago, so we were quite unsure where to begin. We realised that, as with so many things, the beginning was a great place to start, so read on for the brief history of The Darkside Detective‘s inception.

The Darkside Detective was born at the Galway Game Jam in November 2014. The jam itself was actually organised my myself (Paul Conway) and Christopher Colston as one of our contributions to the West of Ireland’s game dev community. The jam was 12 hours long and the theme was ‘hidden worlds’. As organisers and judges we weren’t going to enter the competition, but rather than sitting on our hands for the best part of a day, we decided to get stuck in and make something ourselves. We didn’t have the full 12 hours to work on our game as we had quite a lot of hosting and admin duties to perform, but after we got all of that out of the way, we had about 8 hours to work on a game. Not a lot of time, but what the hell, right?

Our programmer, Christopher, is a big lover of classic adventure games and has just finished an adventure game called Randall and Eimear (due for release soon!), so he was very familiar with the Adventure Creator plugin for Unity. It was a no-brainer for us to try to create an adventure game. We quickly wrote a basic story of a detective (Francis McQueen) investigating the mysterious disappearance of a young girl from her family home and called the prototype Dark Side. It wasn’t Shakespeare – far from it – but it was something we could hang a basic story around. We knocked out a quick structure and some very rough screens depicting each room. It was little more than stick-man art, but it was enough for Chris to plug into unity and start the head long sprint to the finishing a prototype in the time we had.

Rough graphics for figuring out our game jam prototype.

The art style of The Darkside Detective came from necessity more than anything. Working in an extremely small resolution allowed me to work quickly. Putting it simply, less pixels equalled less time pixelling, and time was not on our side. It was relatively simple to knock out some tiny rooms and characters and scale them up.

The scaled up art didn’t look all that hot to be fair. They were flat and a little boring, but I didn’t have the time to pixel in the details that they needed to look polished. Game jam games rarely look amazing, especially if they’re made in 8 hours, but I wasn’t satisfied with how the pixels were looking. I brought the assets into Photoshop and added some HD colours and lighting, and I was surprised by how vibrant the art suddenly appeared to be. Some quick Photoshoppery later and the game was given a layer of charm which we both loved. 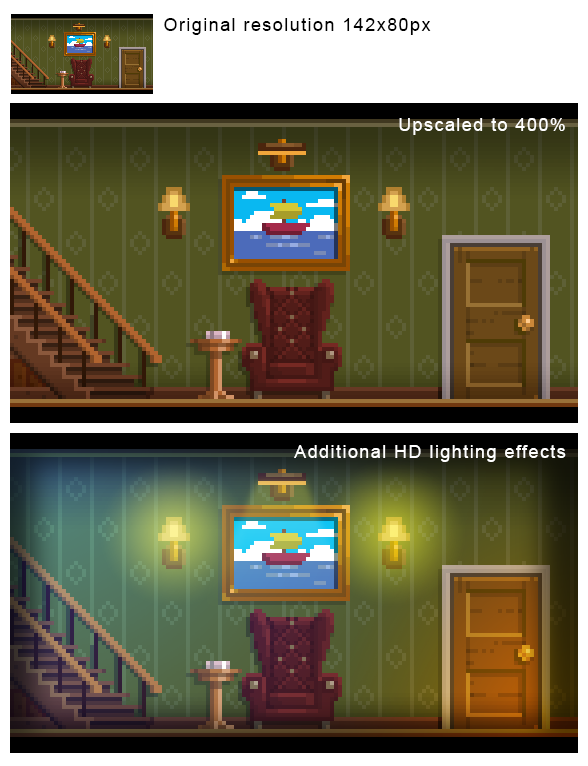 The final build on the day was rough but we were proud of what we achieved. The story was a shoehorned mess and the final puzzle of the game got cut short to the point of making little sense, but it had something that we weren’t expecting: charm.

We uploaded a web build about a week after the jam and posted to a few Facebook Groups, hoping to get some feedback. We expected a few comments on how to improve the visuals and how the game could work better, etc, etc. Instead we got a flood of likes and positive comments praising the game and wanting more. Surprisingly, people really seemed to like the short play experience, which we would have considered a failing rather than a strength. The demo had over 700 plays in the first two days (and can be played here).

When Chris and I met up the following week at a local developers’ gathering, we were dumbfounded by the good reaction the prototype had received online. We chatted about it for a while and decided that it was worth expanding the little adventure game into a longer experience. We figured we could keep bite size fun (or Micro Adventure as we’ve coined it) by breaking the game up into a series of short episodes, each episode being a case file for McQueen to investigate.

Since then a lot has happened. The demo has been played over 5500 time now and our facebook page is almost at 1000 likes at the time of writing this post. Pocket Gamer ran a short but positive piece on the game after discovering some screenshots online. A glut of smaller sites across Europe followed suit as well.

When Dave McCabe, our good buddy and now-writer, came on board the project changed from being a nice effort to a polished and exciting product, his experience writing adventure games helping to bring it to the next level. We’ve had a lot of positive things happen around The Darkside Detective. The little “let’s kill some time” game jam prototype we made back in November has taken on a life of its own. Some other amazing news has happened in the background, too. Great and exciting things which we can’t wait to share with the world, and we’ll be writing about them in the coming days and weeks. Keep an eye on our blog, Facebook and Twitter for updates.

That’s all for now. Apologies for such a long-winded post, but we had a lot to catch up on for our first update.

Thanks for reading!
Paul